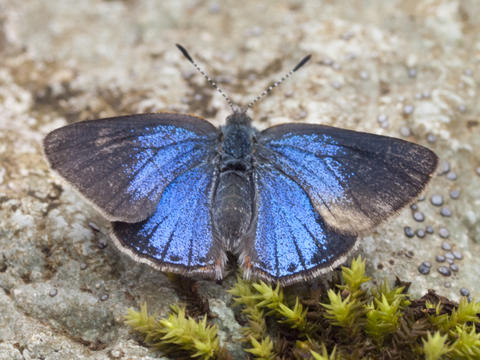 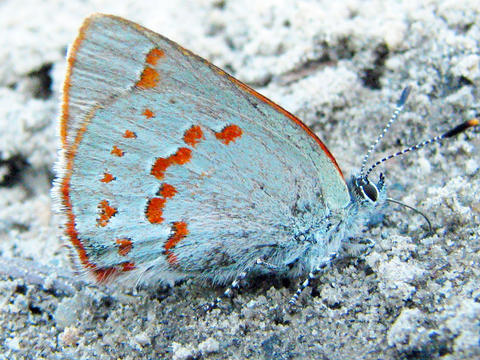 Family: Lycaenidae
Subfamily: Theclinae
Identification: No tails. Upperside blue and black; female has more blue than male. Underside turquoise blue; hindwing with 2 irregular bands of small orange spots.
Wing Span: 7/8 - 15/16 inch (2.2 - 2.4 cm).
Life History: Males perch in treetops to watch for females. Eggs are laid singly on the underside of host plant leaves; caterpillars feed on leaves and fruits.
Flight: Two broods in the north and three in the south, from April-September.
Caterpillar Hosts: Beech (Fagus grandifolia) and beaked hazel (Corylus cornuta).
Adult Food: Nectar from flowers of fleabane, ox-eyed daisy, and hardtack.
Habitat: Deciduous and mixed woods, especially on open ridgetops and along dirt roads.
Range: Rare and local in its range. Maritime Provinces west to northern Michigan and northern Wisconsin; south through the Appalachians to Tennessee and North Carolina.
Conservation: All confirmed populations should be conserved.
NCGR: G4 - Apparently secure globally, though it might be quite rare in parts of its range, especially at the periphery.
Management Needs: Protect habitats and nectar sources.
Comments: NULL