Family: Ypsolophidae
Subfamily:
Identification: Antennae are white, sharply annulated with dark brown except on the basal fourth. The labial palpi are white. The face is also white and the head and thorax are ochreous white. FW ochreous white, while the basal half of the costal edge is ochreous fuscous. From the base runs a broad, dark, ochreous fuscous band outwards below the fold, touching the dorsal edge and then curving upwards to the fold. At the end of the cell is a large, oblong, pronounced, dark fuscous spot, produced into a still larger paler ochreous patch, which covers most of the apical third of the wing and emits three dark fingers to the costal edge. HW paler fuscous. The abdomen is ochreous white and the legs are white, mottled with black exteriorly.
Wing Span: 2.0-2.2 cm
Life History:
Flight:
Caterpillar Hosts:
Adult Food:
Habitat:
Range: California and Arizona.
Conservation:
NCGR:
Management Needs:
Comments: 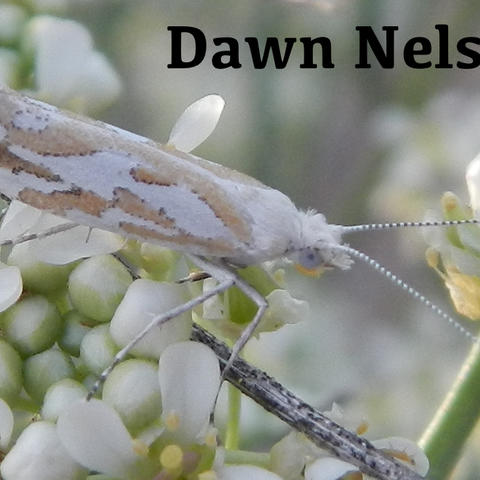