Family: Noctuidae
Subfamily: Oncocnemidinae
Identification: It has a gray-brown forewing with pale filled forewing spots and long black wedges on the distal wing, and bright yellow hindwing with a black marginal band. The ground color is brown-gray, lighter in the medial subterminal area and darker gray near the outer margin. A thin, black basal dash ends at the base of the claviform spot. The antemedial and median lines are absent, except for oblique black lines across the costa. The postmedial line is similar on the costa, but is also represented by an oblique gray line below the reniform spot. The subterminal line is pale gray, thin, and very irregular. It is preceded by long black wedges between the veins. The terminal line is thin and black. The fringe has a striped light gray and gray base and strongly checkered light gray and gray edge. The three forewing spots have thin outer black and inner white outlines and are filled with the ground color. The orbicular spot is long and oval, with the reniform spot is narrow and boomerange-shaped. The clavifom spot is ver
Wing Span: 2.6-2.8 cm
Life History:
Flight: Fall
Caterpillar Hosts: Not known.
Adult Food:
Habitat: This species appears to be rare and sporadic east of the Cascades, and is found on dry, open sagebrush steppe, in juniper woodlands, and in dry canyonlands at low to middle elevations. This species is associated with lithosol and rock outcrops.
Range: Eastern Oregon, eastern Washington and southern Idaho
Conservation:
NCGR:
Management Needs:
Comments:
Taxonomy Notes: Formerly placed in the genus Oncocnemis. 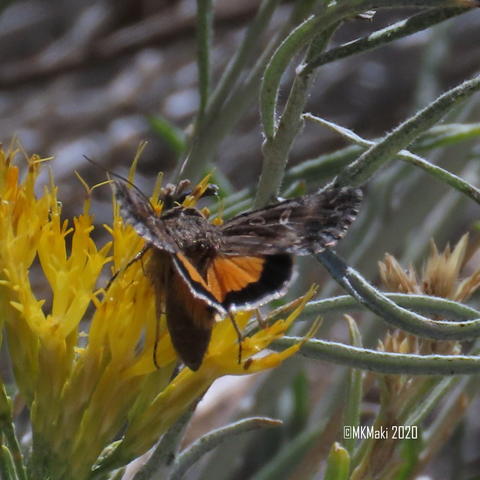