Family: Noctuidae
Subfamily: Oncocnemidinae
Identification: A small light gray species that flies near rock outcrops during summer and fall. Its forewings have a darker gray median area and brick-red scales in and near the reniform spot. The wing is relatively narrow with a squared off apex and smoothly convex lateral margin. The ground color is silvery gray, even on the wing base and mottled with darker gray near the subterminal line. A brick-red flush is present in the subterminal area in many specimens, strongest lateral to the reniform spot. The median area is sooty gray. Black marks are present at the apex on both sides of the subterminal line and in the terminal area near the anal angle between veins CuA1 and CuA2. The basal line is black and thin. The antemedial line is thicker black and smoothly excurved. The median line is dark gray, diffuse, passing through the orbicular spot. The postmedial line is dark gray to black medially and pale gray laterally, thinner than the antemedial line, evident on the costa and below the reniform spot w
Wing Span: 2.4-2.8 cm
Life History:
Flight: mid-July to mid-September
Caterpillar Hosts: Not known
Adult Food:
Habitat: Narrowly restricted to barren, rocky ridgetops and open lava fields at high elevations in the Cascades and Siskiyou Mountains.
Range: West of the Cascade Mountain summits from southwestern British Columbia to southern Oregon. It is most common along the east slope of the Cascades in Washington. It is found on the west slope of the Cascades and in the Siskiyou Mountains in Oregon. An isolated record from the South Hills exists for southern Idaho.
Conservation:
NCGR:
Management Needs:
Comments: 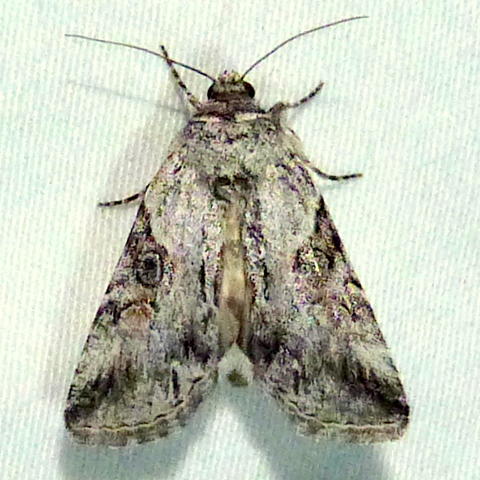