Family: Noctuidae
Subfamily: Oncocnemidinae
Identification: A medium-size grey moth with paler grey and black markings. The forewing has a prominent long narrow black basal dash that meets the pale, elongate claviform, the later faintly outlined in black. The pale orbicular and reniform are combined into a long, narrow wedge, also outlined in black. The normal cross lines are reduced to a series of dark spots on the costa. The veins on the outer half of the wing are finely marked in black scales. The subterminal line is indicated by a series of pale streaks, and the fringe is checkered grey and white. The hindwings are dirty white on the basal half, darkening to form a wide grey terminal band. There is also a small, grey discal bar. The hindwing fringe is grey on the basal half then white. Antennae are simple, and the sexes are similar. Most likely to be confused with O. riparia.
Wing Span: 3.0-3.2 cm
Life History:
Flight: July through September.
Caterpillar Hosts:
Adult Food:
Habitat: Dry grasslands; badlands.
Range: Northern Great Plains north to central Saskatchewan and Alberta, south at least to Montana.
Conservation:
NCGR:
Management Needs:
Comments: 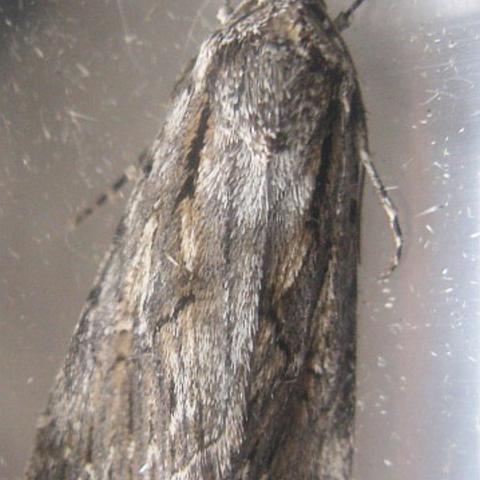