Family: Noctuidae
Subfamily:
Identification: The adult moth has dull gray-brown forewings and off-white hindwings with visible veins.[9] Females and males can be distinguished by the number of bristles on their frenulum, where males have a single bristle while females have multiple. Females are also identifiable due to their racquet-shaped abdomen tip and black scales.
Wing Span: 2.0-3.7 cm
Life History:
Flight:
Caterpillar Hosts: Larvae feed almost exclusively on Poaceae, also called Gramineae. Poaceae is a family of flowering grasses which includes cereal grasses and the grasses of grasslands and pastures.[1] The species targets most cereal crops, including maize, sorghum, rice, millet, and other grasses.[11] Young caterpillars are also known to feed on wheat and oat seedlings.
Adult Food:
Habitat:
Range: Commonly found in the grasslands of Africa and Asia. Within Africa, it is mostly seen near the Sahara in the following countries: Tanzania, Kenya, Uganda, Ethiopia, Somalia, Malawi, Zimbabwe, Zambia, and South Africa. Outside of Africa, the species also inhabits southwest Saudi Arabia, Southeast Asia, Australia, and New Zealand.
Conservation:
NCGR:
Management Needs:
Comments: 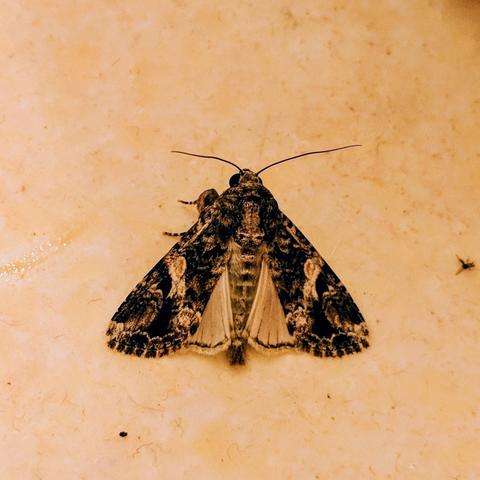