Family: Noctuidae
Subfamily: Oncocnemidinae
Identification: A relatively small moth with white wings with dark basal and terminal areas. The forewings are white with very dark red-brown basal area and a red-brown terminal area suffused with white scales. The median area has a broad brown band overlain with white scales creating a “ghost-like” appearance in some specimens. The orbicular is indicated by a small black dot and the reniform by a small black crescent. Hindwings white with the basal half light blackish brown, a broad terminal band of the same color followed by a white fringe and a prominent dark discal mark. Antennae simple and sexes similar. It bears a superficial resemblance to some of the small flower moths (Heliothinae).
Wing Span: 2.3-2.6 cm
Life History: Almost nothing is known.
Flight:
Caterpillar Hosts: Not known
Adult Food:
Habitat:
Range: A Great Plains species found from extreme southeastern Alberta, southern Saskatchewan and Manitoba south to Nebraska and Oklahoma.
Conservation:
NCGR:
Management Needs:
Comments: 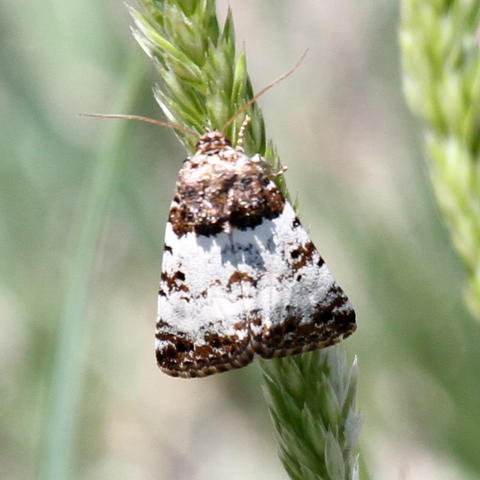