Family: Noctuidae
Subfamily: Noctuinae
Identification: This species can be recognized by the combination of fall flight with a nondescript brown forewing that is significantly darker near the outer margin and a white hindwing. It is similar in size and general appearance to Protoperigea posticata, which is slightly more common and widespread in our area. The distal forewing of P. umbricata is darker gray and more powdery than that of this species. In addition, P. posticata has a yellowish off-white hindwing, not pure white as in P. umbricata. Protoperigea umbricata is also similar to Protoperigea parvulata which is very rare and has only been collected in southeastern Oregon. It has a more deeply indented reniform spot, more irregular subterminal line, and an off-white hindwing that often has dark scales along the outer margin.
Wing Span: 3.6-4.0 cm
Life History:
Flight: Fall
Caterpillar Hosts: Not known
Adult Food:
Habitat: This species is widely distributed throughout the Pacific Northwest in a wide variety of habitats. These include grasslands at low elevations west of the Cascades, mixed hardwood-conifer forests at middle elevations along the west slope of the Cascades, open ponderosa pine forests and juniper woodlands at middle elevations along the east slope of the Cascades, and very dry sagebrush steppe at low elevations east of the Cascades.
Range: Dry forests both west of the Cascades in Oregon and along the east slope of the Cascades as far north as central Washington and in the Blue Mountains of Oregon. The range of this species extends at least as far south as central California. Its distribution is poorly known, in part due to the fact that this species was only described in 2006.
Conservation:
NCGR:
Management Needs:
Comments: 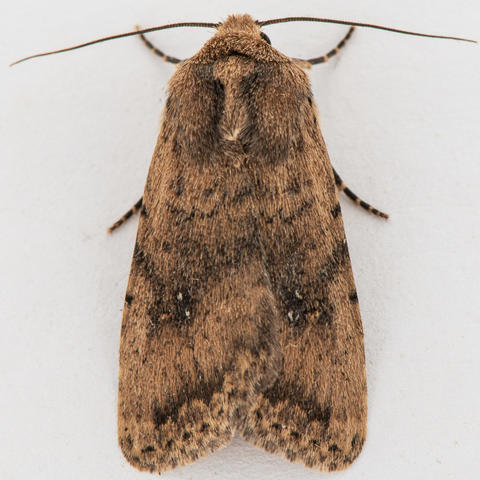