Family: Noctuidae
Subfamily: Noctuinae
Identification: Euxoa trifasciata is a moderately large Euxoa (FW length 16–19 mm) that flies at middle to high elevations in the Cascade Mountains during the summer. It has uniform, dull, dark orange-brown forewings with black basal, antemedial, and postmedial lines. The color is nearly even, only the costa abutting the medial subterminal line is darker. The basal, antemedial, and postmedial lines are similar, dark gray to black with strong components abutting the median area and weaker elsewhere, filled with the ground color. The basal and antemedial lines are slightly irregular, oriented nearly transverse to the forewing axis. The median line is gray, very faint or absent. The postmedial line is weakly scalloped, slightly drawn toward the base on the costa, weakly excurved around the reniform spot and slightly angled toward the base below the spot. The subterminal line is pale but weak, broken into spots on the anterior forewing and absent from the posteriorly. The terminal line is thin, dark. The fringe is concolorous.
Wing Span: 3.2-3.8 cm
Life History:
Flight:
Caterpillar Hosts:
Adult Food:
Habitat: This species occurs at high elevations along the summit of the Cascades and Sierra Nevada ranges along the West Coast, and occupies subalpine spruce-fir forests or subalpine meadows near timberline. It is usually uncommon or rare in this habitat. This species is considered to be management sensitive, depending on disturbed openings and meadows in the forest.
Range: The range extends south from the Pacific Northwest to the Cascade Mountains and Sierra Nevada in California to the vicinity of Lake Tahoe
Conservation:
NCGR:
Management Needs:
Comments: 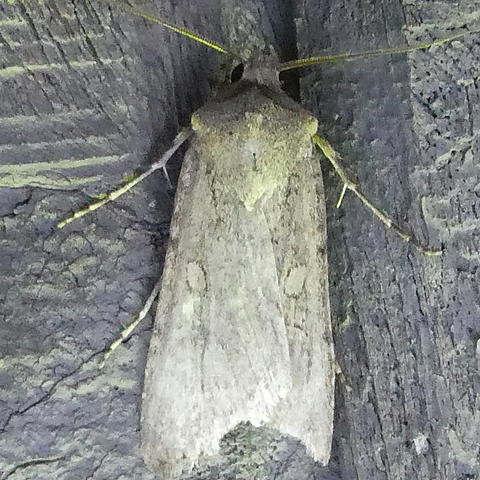