Family: Noctuidae
Subfamily: Noctuinae
Identification: Its forewings have a harlequin-like pattern of red-brown, yellow, and white. The forewing is short and rounded. The basal and subterminal areas are yellow-tan posteriorly and red-brown anteriorly, and the apex is ochre-yellow. The median area and terminal area are darker red-brown, forming a large triangle in the terminal area opposite the cell. The antemedial and postmedial lines are white and black, white opposite the median area. The antemedial line is slightly irregular, oriented at a right angle to the axis of the wing. The postmedial line curves around the reniform spot, touching both ends of the spot and nearly perpendicular to the posterior margin below the spot. The subterminal line is light ochre, wide and jaggedly irregular. A black terminal line is present. The fringe is dark gray, with the base weakly checkered with light yellow. The orbicular and reniform spots are outlined in black, filled with yellow peripherally, and light red-brown centrally. The orbicular spot is small, oval, touching the
Wing Span: 1.4-1.8 cm
Life History:
Flight: late summer
Caterpillar Hosts: No information is presently available regarding larval foodplants of this species.
Adult Food:
Habitat: Hanging bogs within open serpentine barren habitats at low elevations.
Range: It is a Siskiyou Mountain endemic species.
Conservation:
NCGR:
Management Needs:
Comments: 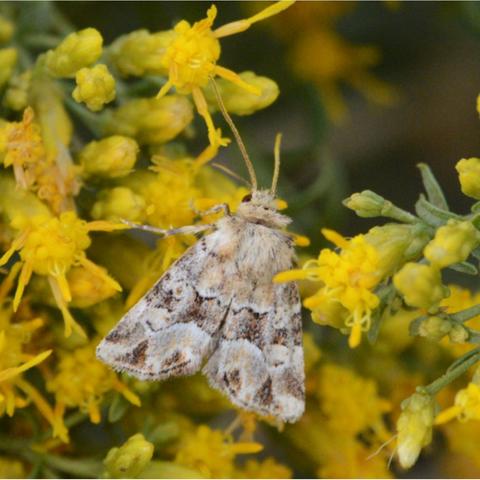