Family: Noctuidae
Subfamily: Oncocnemidinae
Identification: A mottled reddish gray-brown to orange-brown medium-sized moth with an cream to orange-ochre hindwing with a dark postmedial line and black marginal band. The forewing color is darkest orange in the the mountains of Oregon and becomes lighter toward the north, especially in open steppe. It is mottled with gray, darkest in the median area and lateral subterminal area. The basal, antemedial, and postmedial lines are gray, double filled with a slightly lighter shade of the ground color. The slightly irregular antemedial line is slanted slightly toward the outer margin. The postmedial line is scalloped, focally excurved around the reniform spot and straight at a strong slant toward the base below the level of the cell. The dark median line is prominent in most specimens. The subterminal line is pale, similar to the filling of the other lines, moderately irregular in course and preceded by a gray shade that is as dark as the median line. The fringe is of the ground color. The orbicular and reniform spots are fain
Wing Span: 3.0-3.2 cm
Life History:
Flight: August through September
Caterpillar Hosts: Unknown
Adult Food:
Habitat: Barren, rocky ridgetops at high elevations in the mountains of western Oregon and Washington. It also occurs in juniper woodlands along the east slope of the Cascades at middle elevations in central Oregon and in sage steppe in the Columbia Basin.
Range: Found throughout much of California south of the Northwest. It also occurs in the Rocky Mountains, with records from southwestern Alberta to Colorado.
Conservation:
NCGR:
Management Needs:
Comments:
Taxonomy Notes: None. 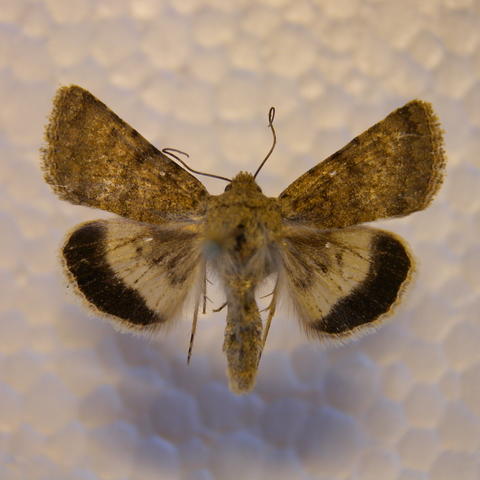