Family: Geometridae
Subfamily: Larentiinae
Identification: Very closely similar to S. fervefactaria, but usually found at lower elevations and apparently not ranging so far northward nor eastward. Averaging smaller in size. Light coloring variable in hue, but most commonly prevalently orange, and often distinctly pinkish (especially below). Pattern variable, but front wing with light markings near apex normally forming roughly a "V" shape, with arms separated to near a very wide base and without a distinct trunk below the diverging arms; with outer arm much the narrower and usually distinctly irregular along outer margin, but rarely (if ever?) absent; costa at base of wing gray. Hind wing with large dark zone near costa on outer half of wing smaller, vertically narrower than tall (crossing axis of wing).
Wing Span:
Life History:
Flight: June thru August
Caterpillar Hosts:
Adult Food:
Habitat:
Range: Northward from Mexico into southern New Mexico and Arizona.
Conservation:
NCGR:
Management Needs:
Comments:
Taxonomy Notes: None. 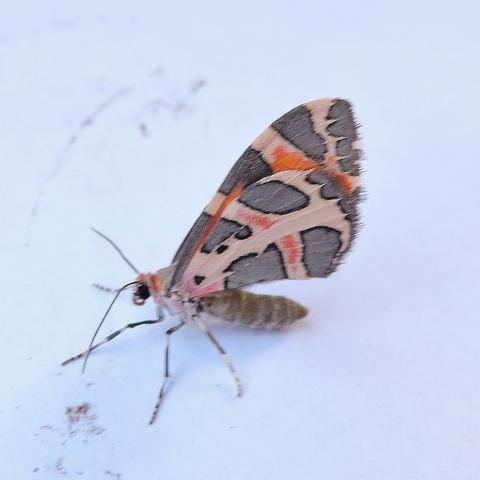