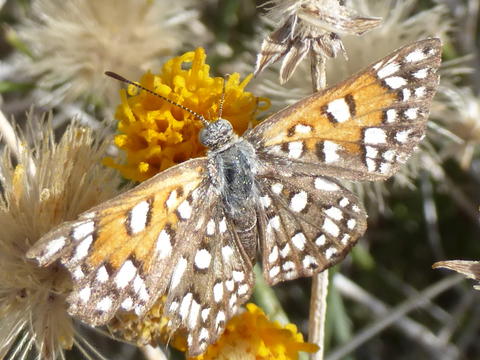 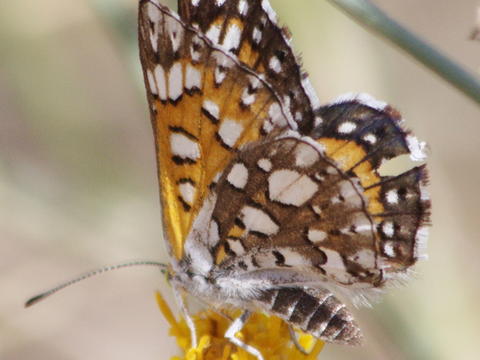 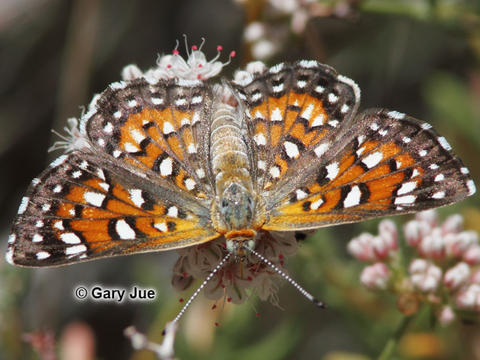 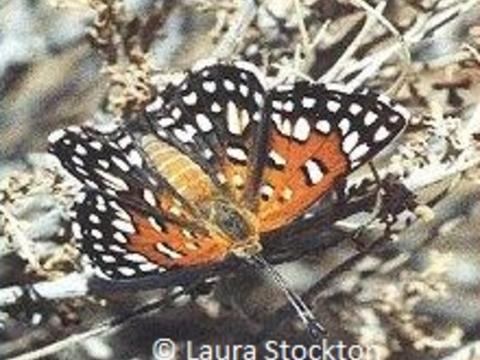 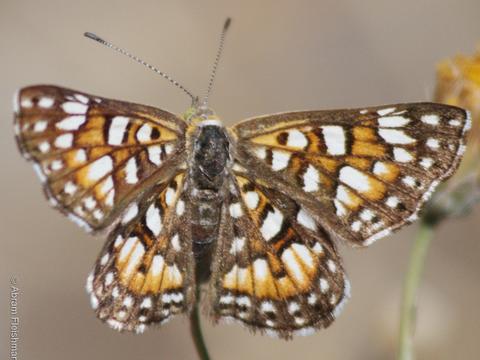 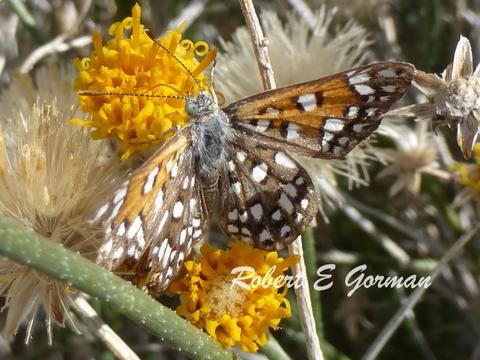 Family: Riodinidae
Subfamily: Riodininae
Identification: Upperside orange-brown to black, checkered with black and white spots. Forewing outer portion black with white spots and inner portion with yellow-orange to brick-red patch. Underside gray with white spots to red-orange or yellow-orange with black areas and white spots.
Wing Span: 7/8 - 1 5/16 inches (2.2 - 3.3 cm).
Life History: Males perch in hillside hollows or flats to watch for females. Eggs are laid in groups of 2-4 on lower leaves of host plant, or singly on other parts of plant. Caterpillars rest during the day in shelters of leaves tied together with silk, emerging at night to feed. Young caterpillars feed on leaves, older caterpillars eat leaves and stems. Young caterpillars hibernate inside plant parts such as the dilated stems of E. inflatum.
Flight: Mid- February to mid-November (2-3 flights).
Caterpillar Hosts: Various wild buckwheats (Eriogonum), including Inflated Buckwheat, Wright\'s Buckwheat, others, and possibly Kramerias.
Adult Food: Nectar from flowers of Eriogonum and other plants, especially yellow-flowered composites.
Habitat: Various arid lands including rocky hills and alluvial fans and flats, oak grassland.
Range: Southeastern California, southern Nevada, Arizona, and southwestern New Mexico south to Baja California and mainland Mexico.
Conservation: Sufficient populations, but some may be threatened by invasive alien weeds such as cheatgrass.
NCGR: Probably G5 - Demonstrably secure globally, though it may be quite rare in parts of its range, especially at the periphery.
Management Needs: None reported.
Comments:
Taxonomy Notes: Subspecies mejicanus also referred to as the Sonoran Metalmark. 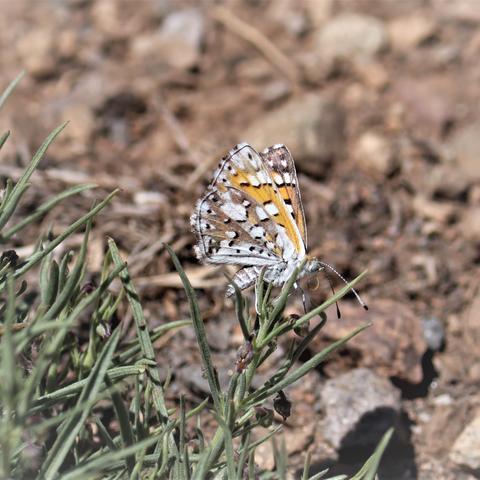 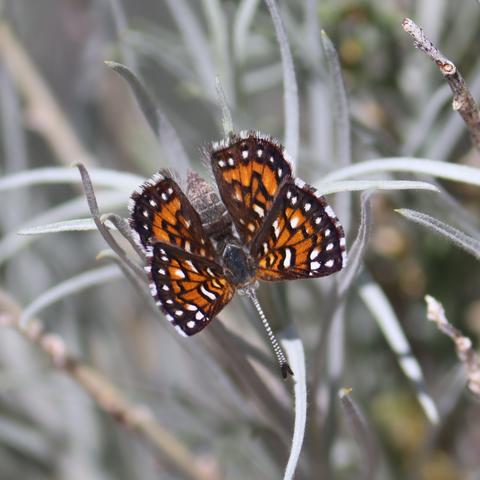 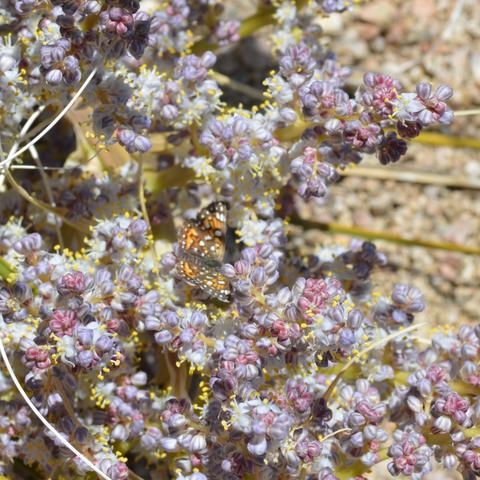 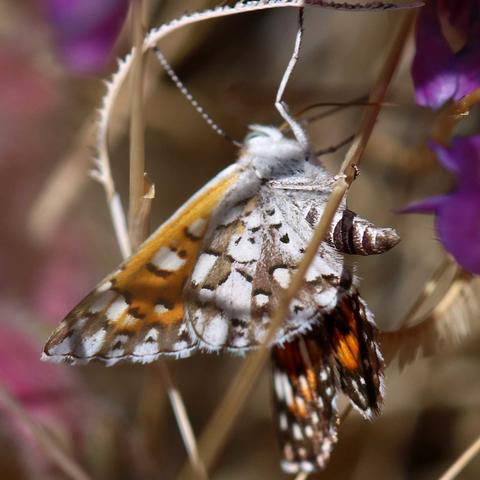 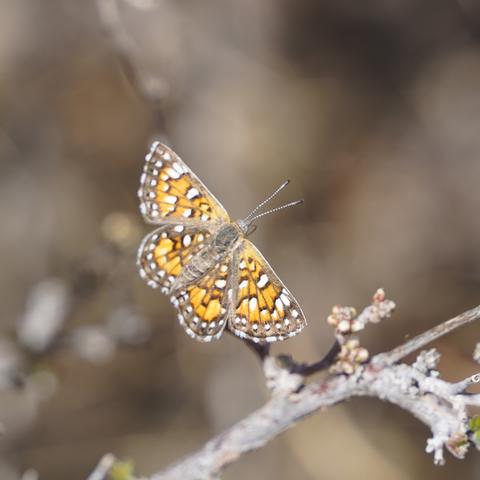 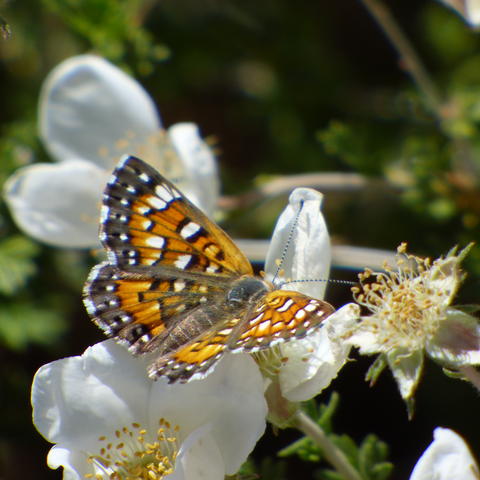 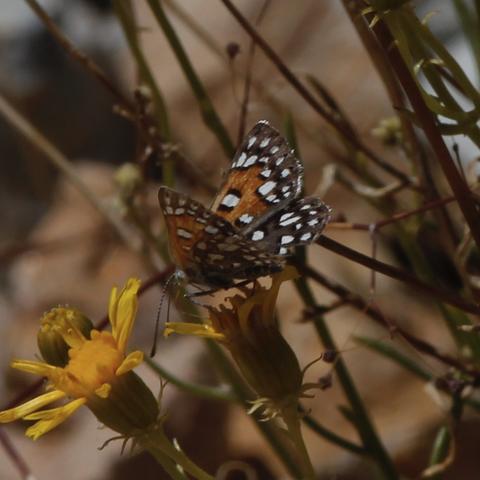 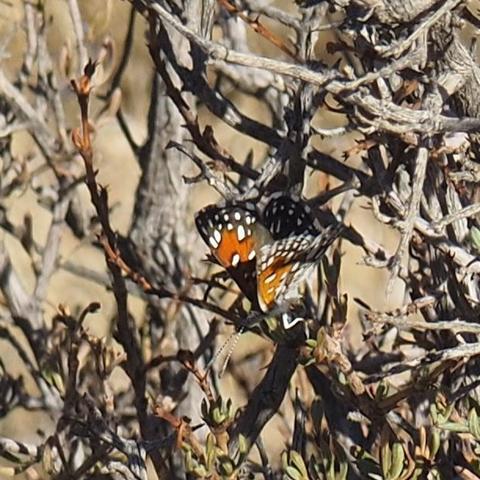 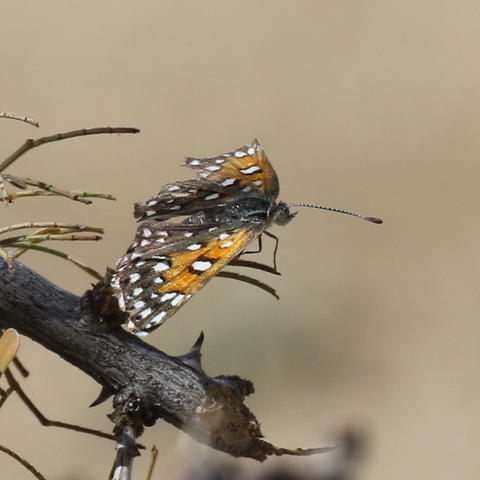 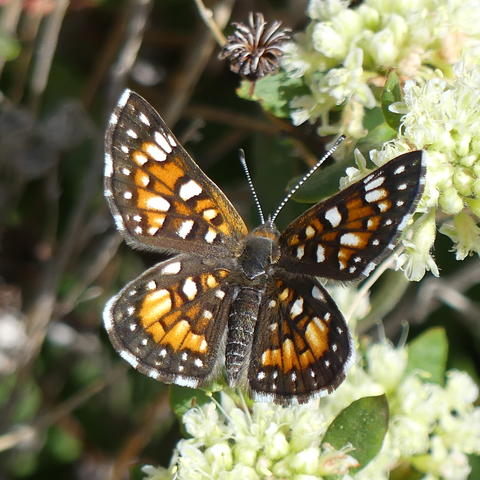 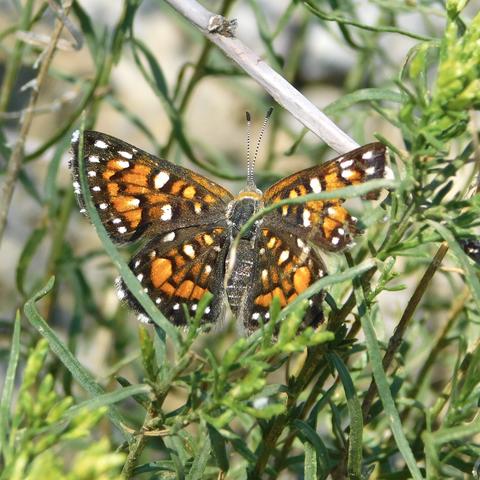 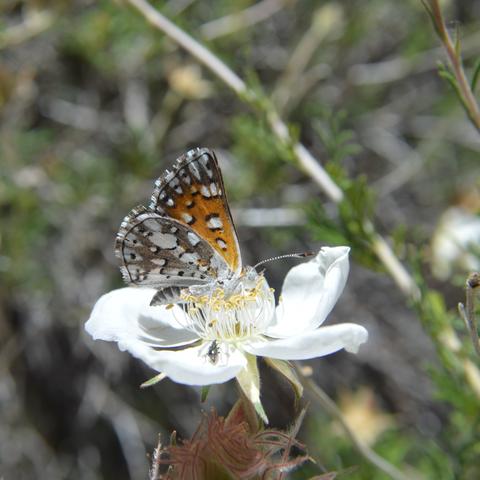 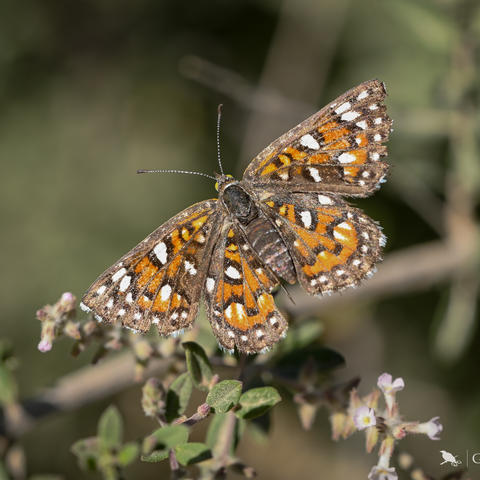 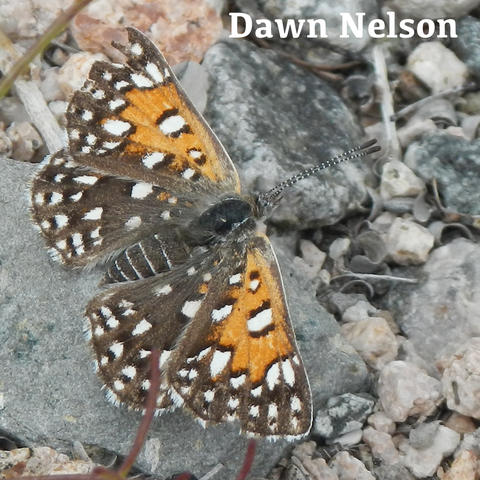 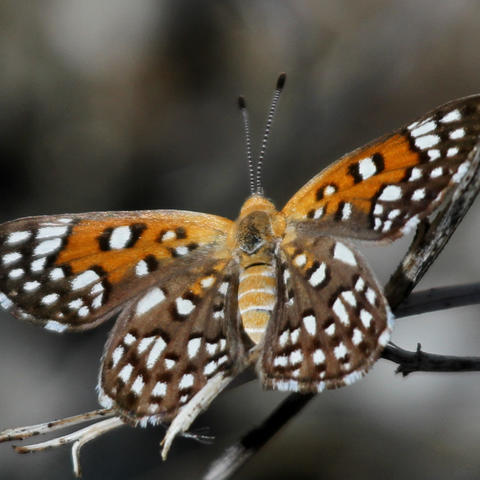 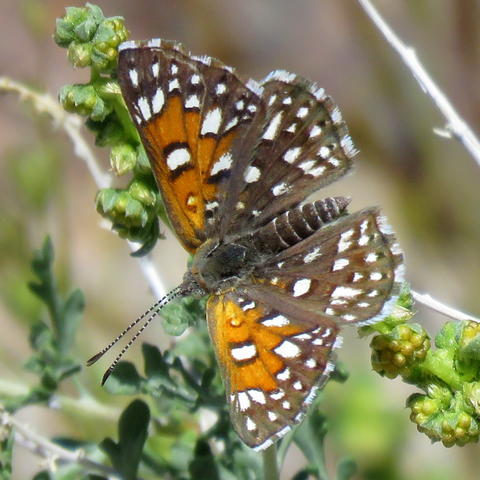 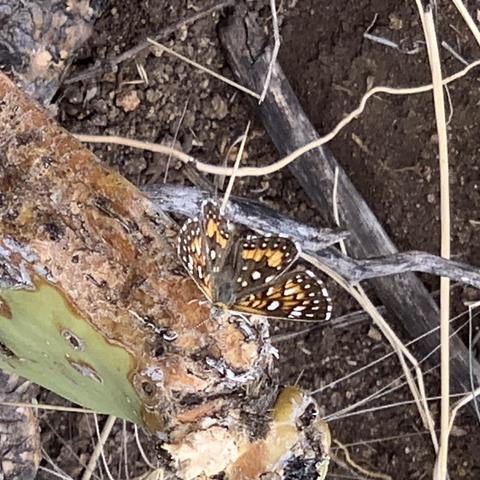 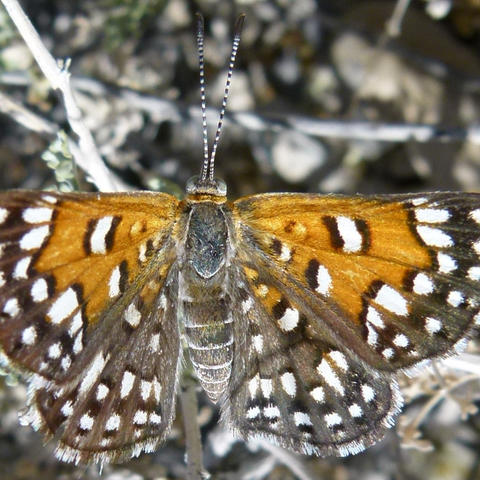 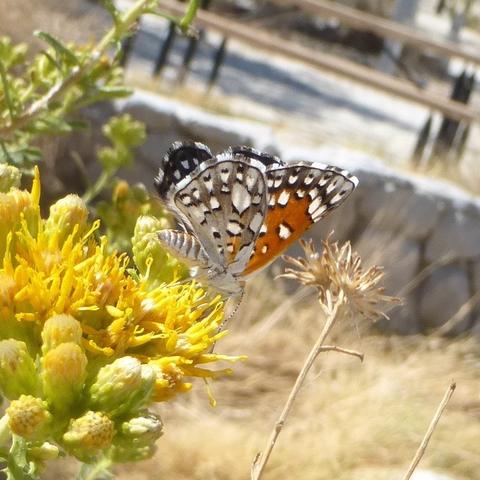 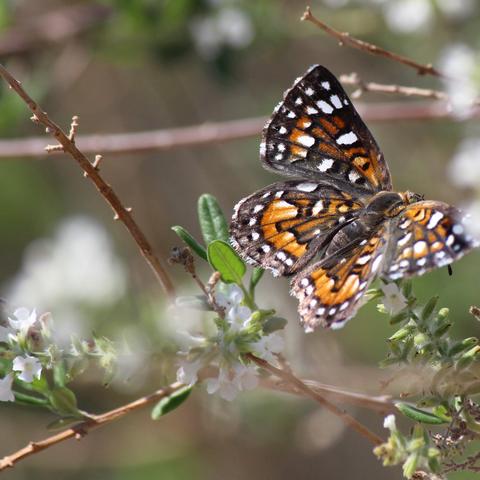 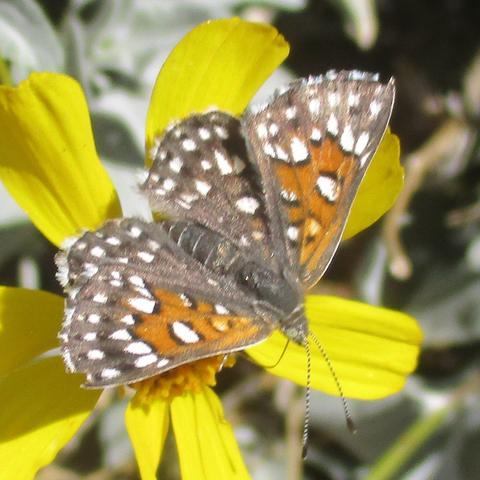 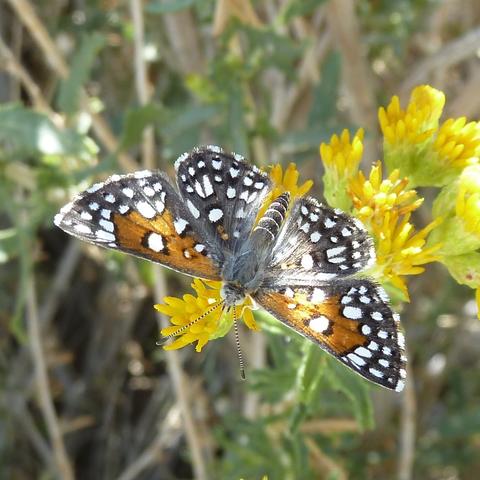 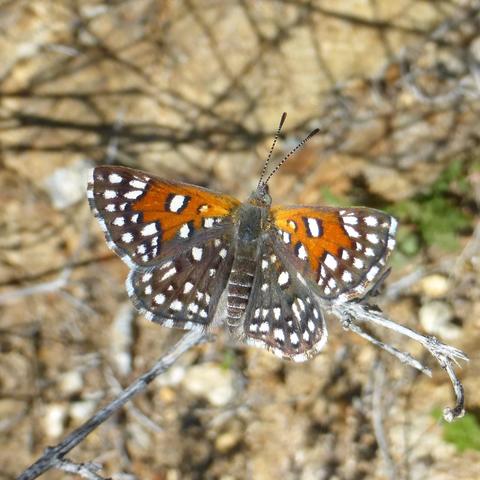 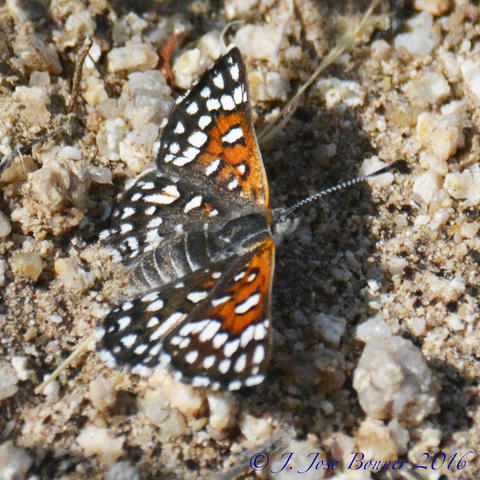