Family: Noctuidae
Subfamily: Acronictinae
Identification: A medium-sized noctuid moth with a slightly streaky medium gray wing marked with thick black basal, anal, and apical dashes and a golden yellow central thorax that flies in dry forest and riparian areas in dry steppe during the summer. The streaky appearance of the wing is due to lighter areas through the cell and fold, slightly darker veins on the costal and outer margins, long black triangles between veins at the terminal line, and the long dashes. The terminal line gives the impression that the distal wing has a sawtooth margin, but the actual contour is smooth. The transverse lines are gray, double, with lighter gray filling. The irregular antemedial line is evident anterior to the basal dash. The median line is visible as an oblique line anterior to the cell. The postmedial line is thin and evenly dentate, broadly convex around the reniform spot and bent on vein A1+A2 above the trailing margin. The subterminal line is very faint, light gray. The fringe is gray-brown, interrupted by the gray ground at ea
Wing Span: 3.4-3.8 cm
Life History:
Flight: May to early August
Caterpillar Hosts:
Adult Food:
Habitat: Riparian habitats along creeks and rivers at low elevations east of the Cascades, particularly near stands of cottonwood.
Range: Western North America; from Colorado and New Mexico to coastal California
Conservation:
NCGR:
Management Needs:
Comments:
Taxonomy Notes: None. 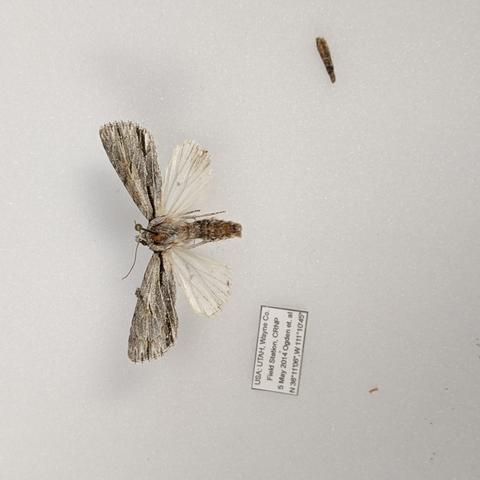