Submitted by: Robert Gorman
Specimen type: Photograph
Observation notes: Hot day Clear dry Hermes Copper - Male Female Descanso , San Diego County, California, USA June 8, 2021 Larger is female above in fresh condition male also fairly fresh below. We have been following this Colony since 2015 has been a stable colony until researchers found it. Like all the other areas they have studied and taken all they could find for gene flow study when numbers were at an all time low! Also transrelocation of this species has decimated and eliminated all other known colonies. Blaming fire over and over does not make All of the bad decisions made while claiming to be helping this species go away. If the researchers are allowed to do the same failed inept procedures again there are no other stable populations left after this one is gone. Area after area claiming to have stable populations while moving these to other areas has not worked. Captive Breeding in protected enclosures on native plants while keeping the grass grazed down to prevent fire would work. The native oaks water the red berry even in dry years by condensation dripping of leaves and watering the red berry. The Red Berry near the oaks are in the best shape of any in the county of San Diego. The shade provided by the oaks seems to be helpful also. There are water sources in the area for this group and this would need to be simulated to be successful. This is something that would have to be constantly monitored to ensure a good outcome. Its the best solution to breed enough of this species so that relocation of a good number at one time would be much more likely to work.
Status: Resident
Verified by: Ken Davenport
Coordinator notes: Robert: Do you want me to put this in the Season Summary? Your lengthy comments about hermes will probably not be seen by Federal Fish and Wildlife. You should write a letter stating your observations and suggestions and send those comments to them. California lists hermes and it requires a special permit to collect them.-Ken Davenport
Checklist region(s): United States, California, San Diego County 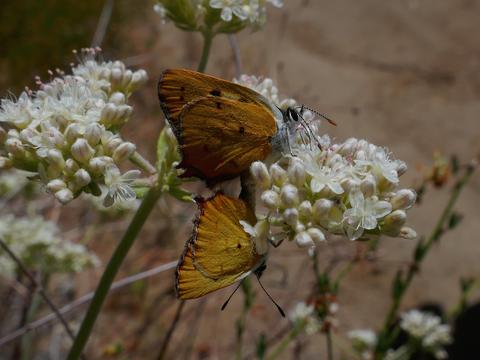