Submitted by: tirvine2020
Specimen type: Photograph
Observation notes: Reared from Prunus serotina. Found as larvae making the later discussed cone-shaped tentiform mines on 5/14. These larvae were assumed to have made lower surface blotch mines (also discussed below) prior to creating the tentiform mines, photos of those are added. Both the lower surface leaf mines (which were all vacated when they were found) and tentiform mines were found on the same branch on one tree, and only one other similar underside blotch mine with succeeding tentiform mine was found in the park. The lower surface mines started at or near the apex of the leaf, and began as serpentine linear mines on the lower surface of the leaves (see images two and three). This then expanded into a blotch that sometimes spanned the space between the midrib and margin and was almost always touching the midrib. Both the blotch and serpentine portions were white and puffy. Two mines where the linear portion ran along the leaf margin caused the leaf to slightly fold over where the mine ran. When the tissue was removed to look inside the blotch portion of the mines, there were strips of frass pellets that show that the larva likely created the blotch by mining in longitudinal sweeps, and eventually towards the end of the final sweep in the mine the larva goes from being a lower surface miner to making some of the blotch full depth. At this full depth portion, the larva deposits all frass in a corner of the mine (the aforementioned line of frass stops before this portion of the mine and there is frass in a corner, so it is assumed that all the frass at the full depth portion is put there). To reiterate, these mines were found empty but based on descriptions of other Caloptilia larvae I have reason to suspect these may have been made by the same larvae. The tentiform shelters that the larvae were observed to have made are created by the larva first cutting the leaf in a line approximately perpendicular to the midrib about two thirds of the way from the base of the leaf to the apex. The rest of the leaf is then folded into a cone with all edges sealed tightly from the inside. The portion of the leaf that gets cut off at the start is kept inside the cone and is eaten. Frass is deposited along a suspended strip of silk which seems to hold it together. After finishing eating the initial cut-off piece of the leaf, the larva then begins to window mine the rest of the leaf making up the cone (see fourth photo). Eventually the larva eats a hole in the cone and exits to spin its cocoon. The larvae both exited and did not incorporate the leaves in the container, they went to the rounded “corners” (they’re not really corners, the containers are cylindrical with rounded edges) and spun a two-layered cocoon (see final photo). This individual pupated on 5/16. Each layer was a thick, ovoid mat, the second inner one being the thicker of the two. Based on descriptions of Caloptilia larvae, the lower surface leaf mines might be primary leaf mines and the tentiform mines may be secondary mines. This would also explain why these two types of mines were only found grouped together when found. When emerging from the cocoon, the pupa is thrust entirely out of the chamber. This individual eclosed today, 6/3.
Status: Resident
Verified by: rogerdowner
Coordinator notes: None.
Checklist region(s): United States, Massachusetts, Middlesex County 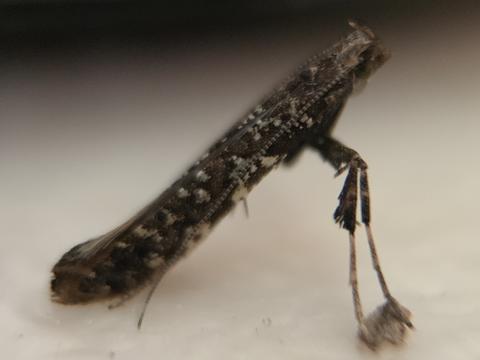 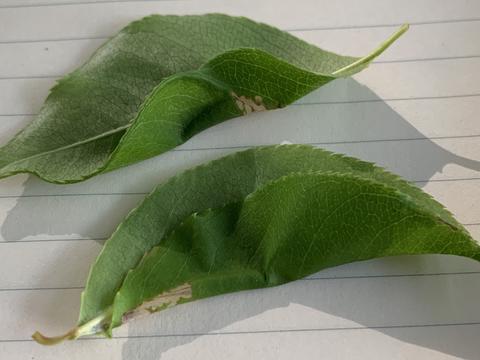 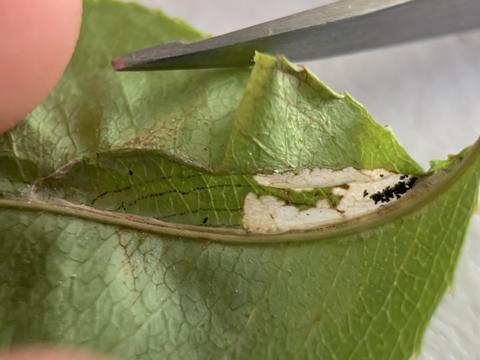 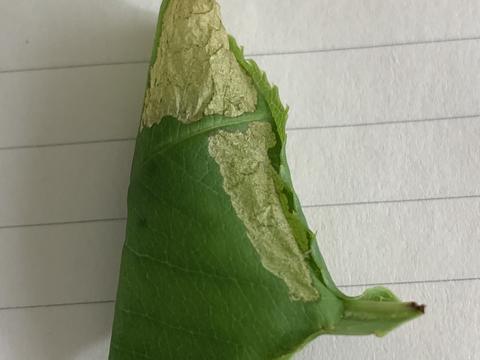 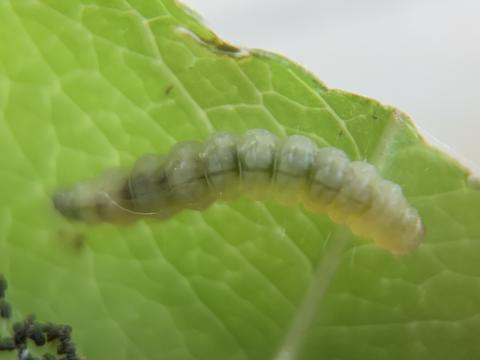 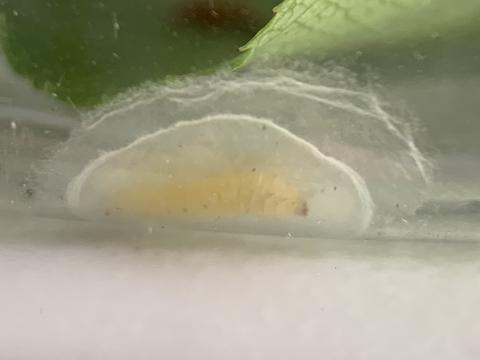