Submitted by: Devin Floyd
Specimen type: Photograph
Observation notes: Albemarle County, Virginia Ragged Mountains Hedgerow Property, Parcel 07500-00-00-06400 Elevation Range of Population Observed: 728’-864’ Ecoregion (Omernik Level IV): Piedmont Uplands Natural Plant Community affiliation: Basic Mesic Forest Found in 2017 by Drew Chaney and Devin Floyd, and studied by the same, with the addition of Ezra Staengl and Emily Luebke, in 2018. The initial discovery was made in early May of 2017, due to the sighting of an enormous azure. It was followed to its local phenological nectar preference (Thaspium barbinode) and several eggs were observed on Actaea racemosa flower stalks nearby. The butterfly was not caught in the act of ovipositing in 2017, despite there being eggs. Several adult butterfly individuals were observed ovipositing on Actaea racemosa at the same site on June 5, 2018 within the survey area. In all cases, they were observed in association with the Actaea. No viable nectar sources were present in the hollow on the day of the survey, and it was clear that the butterflies were there for one purpose - ovipositing. Two were tracked between ovipositing efforts, and during rest they would alight upon a horizontal leaf, less than 15 feet off the ground, for 5-10 minutes, before returning to the cohosh for more egg-laying. Host plant: Actaea racemosa during survey. Caterpillars were documented eating flower buds and leaves during our June 5, 2018 survey. Density: The numbers of caterpillars observed was high, and consistent throughout a large area containing more than 180 individual plants with fully developed flower spikes. First Instar Coloration: We were able to document the color of several examples from each of four instars during survey. All first instar caterpillars observed were yellow in color, except for one that appeared to have been in the act of emerging from the egg. It was a very pale yellowish-green. General Description of Morphology and Behavior: Eggs were counted during the survey. They were typically mounted firmly to the bottom side of a tight flower bud. They are round, rather flattened and smooth, with a small dimple in the center on the top. There were almost always eggs on the flower spikes, and most often just one or two per spike. We found only one example of egg stacking, with two eggs being deposited in succession, one atop the other. There were four size groupings evident in the data collected for the larvae, each presumably coinciding with each of the four instars expected of the species. The first instar was consistently pale yellowish-green to yellow. The second instars were mostly green, with two maroon exceptions. Those thereafter were mostly green, with some maroon examples, and several boldly patterned mixed maroon, brown, white, and green. Three examples of pure white caterpillars were found on one plant, one late instar, and two second instars. It was clear that the earliest instar frequently entered the young flower buds of the Actaea flower spike, emptied its contents, and then exited through the same hole through which it entered. This pattern was often noted, from the top of the spike to the bottom, and often with a large late instar caterpillar on the lower flower stalk or upper set of leaves. On several occasions it was clear that the caterpillar had eating all the buds, and even through the flower stalk, severing it midway. One caterpillar was very freshly emerged from an egg. It’s color was very pale yellowish-green, and it’s setae were pronounced in its small stature. First instar caterpillars were often observed on the move, between buds, and in the grasp of predatory insects and small spiders. It was evident that the number of tending ants (and thus the predatory protection) was proportional to the size of the caterpillar. While first instar caterpillars most often had no tending ants, as many as 20 or more could be observed on some of the largest (12-13mm) fourth instar caterpillars. The larger caterpillars were typically stretched along the bud or floret peduncel, with the feet clasping the main stalk, and the head busy consuming the flower bud. About the same amount were observed wrapped around buds while eating. This was particularly true of the second and third instar size range (4-8mm). The first and second instars were notably tolerant of being handled or touched upon the plant. The larger caterpillars would sometimes curl and drop from the flower stalk, left dangling out of harm’s way by a thread until the coast was clear; and the climb and return to the florets would be begin. The ants guarding the caterpillars were typically slow moving, and sometimes entirely still, until contact was made. Upon moving the flower stalk, or touching the caterpillar, the ants would begin moving frantically. Many would jump to the ground. Some would leap upon the hand. But in no case were survey members bitten, contrary to the historic accounts of the ants being aggressive and quick to attack with a bite. Two sizes of ants, each with slight color variation, were observed. It was unclear whether they represented two species, or different sexes/phases of development.
Status: Resident
Verified by: drerbium
Coordinator notes: None.
Checklist region(s): United States, Virginia, Albemarle County 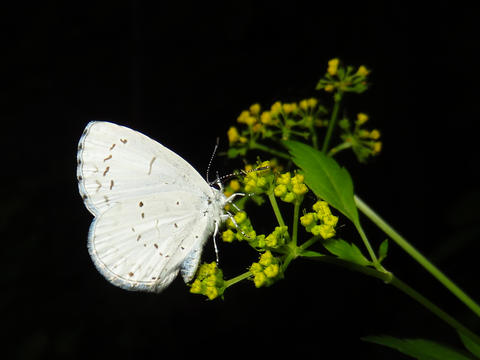 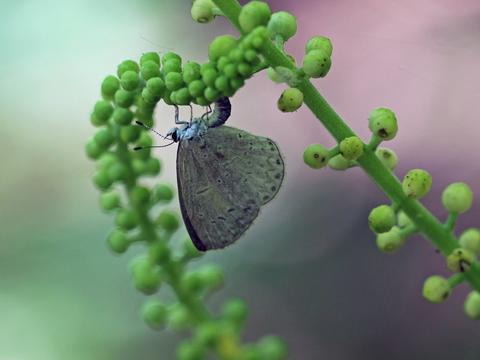 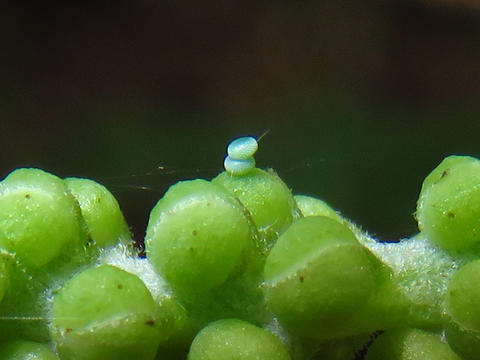 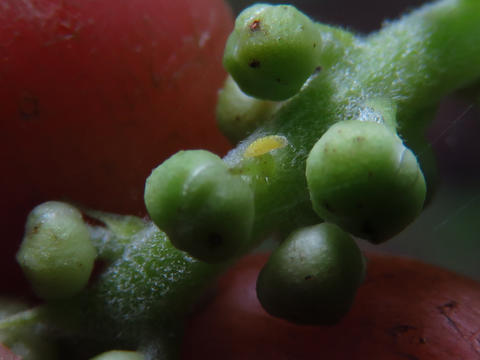 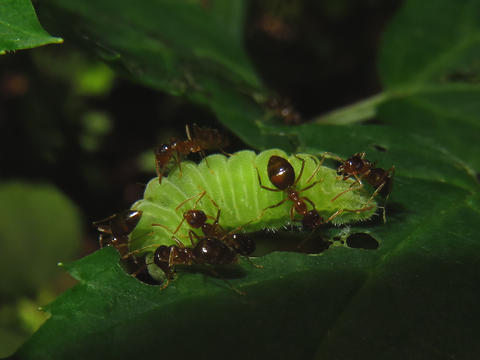 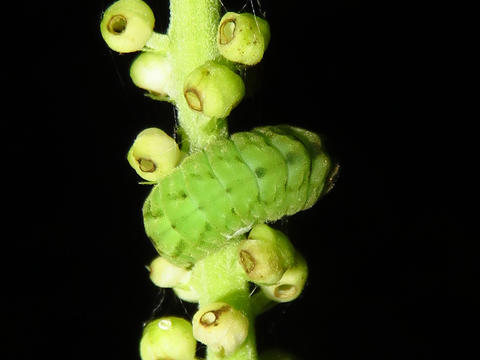