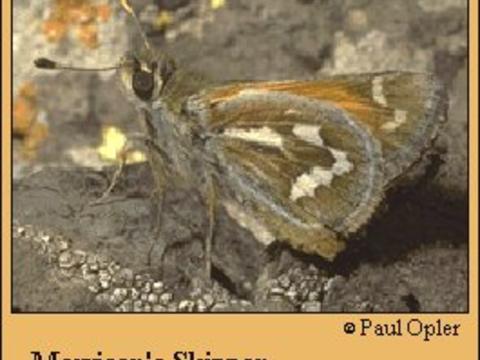 Family: Hesperiidae
Subfamily: Hesperiinae
Identification: Upperside is orange-brown with a very wide brown border. Male has a black stigma on the forewing; female has a black bar. Underside of hindwing is dark brown; lower edge is orange-brown; the angled postmedian band and the band from the base to the middle of the wing are white.
Wing Span: 1 - 1 1/8 inches (2.5 - 2.9 cm).
Life History: To wait for females males perch on the ground or rocks near shrubs or trees on hilltops.
Flight: One flight; from May-June in the foothills, May-July at higher altitudes. Several flights from April-May and September in west Texas.
Caterpillar Hosts: Not reported.
Adult Food: Flower nectar.
Habitat: Grassy openings in Ponderosa pine, pinyon forest, and oak woodlands.
Range: Very local. Colorado, Arizona, New Mexico, west Texas, and northern Mexico.
Conservation: Not usually required.
NCGR: G4 - Apparently secure globally, though it might be quite rare in parts of its range, especially at the periphery.
Management Needs: None reported.
Comments: NULL