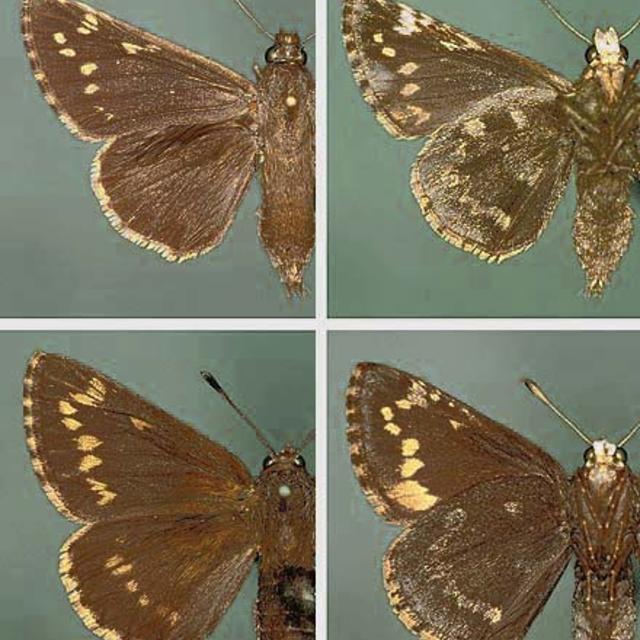 Family: Hesperiidae
Subfamily: Megathyminae
Identification: Fringes are cream with black at the vein ends. Upperside is brown-black; forewing has a series of small oval cream spots. Underside of hindwing is brown-black with a gray dusting on the outer portion.
Wing Span: 1 3/4 - 2 inches (4.5 - 5.1 cm).
Life History: Females glue eggs singly to leaves and flowers of the host. Young caterpillars bore directly into the root or first bore through the leaves or flowers. Caterpillars make silk chimneys or tents which project from the plant, in which they feed, overwinter, and pupate. The chrysalids can move up and down in their burrows.
Flight: Two broods from April-May and September-October.
Caterpillar Hosts: Texas tuberose (Manfreda maculosa) in the agave family.
Adult Food: Adults do not feed but males sip moisture from mud.
Habitat: Subtropical thorn forest and pine forest.
Range: South Texas and northern Mexico.
Conservation: This species is rare due to destruction of its habitat. Populations should be conserved wherever found.
NCGR: G2 - Imperiled globally because of rarity (6 to 20 occurrences), or because of other factors demonstrably making it very vulnerable to extinction throughout its range. (Endangered throughout its range).
Management Needs: None reported.
Comments: NULL