Submitted by: Christian.Nunes
Specimen type: Photograph
Observation notes: I spotted a large orange skipper flying low to the ground on top of the Varra Ridge in southern Boulder County. It landed on a large thistle (bull thistle?) and nectared. I noted a large pale orange skipper with no markings on the hind wing. The abdomen protruded noticeably beyond the wings. The forewing was distinctly pointed. At this point I returned to my truck to get a camera, at which point I lost it. I found it again in about 10 minutes on a nearby thistle. It fed for several minutes, barely moving and never opening its wings. I took as many photos as I needed and I left it as it was. The combination of large size, flight date and paucity of markings lead me to believe it is an H. ottoe, vs. H. leonardus pawnee or Polites origenes.
Status: Resident
Verified by: mikefisher
Coordinator notes: Worn female. End of flight. Looks most like H. ottoe. Good comparisons to H. leonardus and P. origines made by submitter. A bit early for the former, a bit late for the latter.
Checklist region(s): Boulder County, Colorado, United States 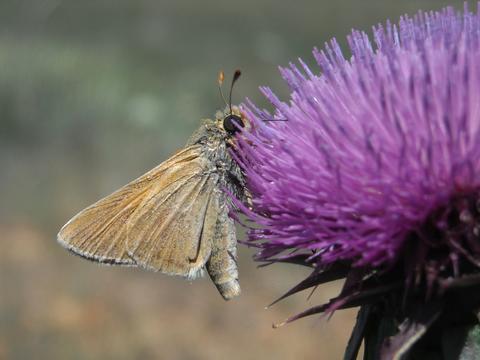