Submitted by: yhelfman
Specimen type: Photograph
Observation notes: butterfly was resting on plants initially I thought it is Coastal Green Hairstreak some sites also refer to it as Lotus Hairstreak I'm wondering if they are the same or different species and it'd be nice to get an ID confirmation. Thank you!
Status: Resident
Verified by: Ken Davenport
Coordinator notes: I can't definetly say based on one individual. Either species could be in Mendocino County and another problem is that your individual could be the Coastal Greeen Hairstreak (Callophrys viridis) per a ICZN decision about 10 years ago, this name not yet recognized by Bamona for reasons unknown to me or it could be Callophrys dumetorum dumetorum, perplexa (Both dumetorum and perplexa are Bramble Hairstreaks, NOT COASTAL GREEN HAIRSTREAKS which are viridis) occurs as far north as Monterey County along the Coast. Since Bamona has yet to correct my names choices, I am accepting the record tentatively. NABA treats both dumetorum and viridis as the same species while others believe viridis is a sheridani subspecies. The situation in the Sierra Nevada is even more complex with 3 subspecies of dumetorum, the two already named and superperplexa found from Kern County north to Mono County along the east side of the Sierra Nevada. The latter subspecies has sheridanii and comstocki influence in its genomic DNA...Ken Davenport...one of several people working on these green hairstreaks and one who co-authored the ICZN petition to restore dumetorum and viridis to their original names.
Checklist region(s): United States, California, Mendocino County 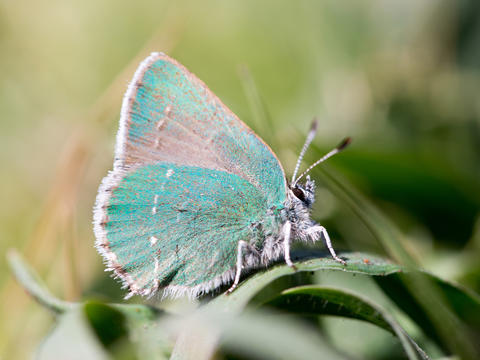