Submitted by: Dwaine Wagoner
Specimen type: Photograph
Observation notes: On a Lepidopterist Society fieldtrip. For my species checklist.
Status: Resident
Verified by: mikefisher
Coordinator notes: Your ID as "Boloria montinus" is somewhat correct. There remains a controversy as to whether or not there are three, two or only one species in North America. Some consider Boloria titania the correct species in N.A., others B. chariclea; and some that believe montinus is distinct or actually represent titania in N.A. We are using chariclea currently on the BAMONA site. Montinus would be applicable on in the eastern part of N.A. (eastern Canada and northern New England, perhaps elsewhere to the west in arctic Canada where one student there has found what he considers chariclea earlier in the year and montinus a little later at or near the same locations (based on condition of the adults). The Colorado subspecies under chariclea or titania, in whatever instance, will be helena as you show in your photo. DNA study may eventually sort this out. With very closely related species such as these, present DNA analysis has limitations. Mike
Checklist region(s): United States, Colorado, Clear Creek County 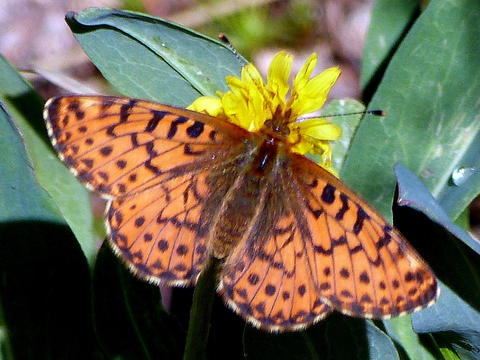