Submitted by: sam steed
Specimen type: Photograph
Observation notes: I found this little guy on my porch (it was 88 degrees that day) unfortunately not on a host plant but my garden is right beside my porch. The plants that are in my garden include: hydrangea, Japanese Iris, and two different kinds of stonecrop. I thought he was a worm at first in the way he moved until I realized he was a caterpillar. Once I watched him for a bit I observed his little legs moving kind of like a millipede? I picked him up to move him to a safer place and the second I did he curled up in a ball and put his hind end in front of himself, which has a tiny fork at the end which made me think he was trying to mimic some other type of bug? Or maybe he was trying to confuse a predator and trick it into thinking that his hind end was his head? It was just cool because his head was safely tucked underneath itself. I have pictures of this exact behavior and I wish I could upload more than one picture but I chose to only upload the picture that captured the caterpillar clearly and not rolled up in a ball. I live in Ohio and have never once seen a caterpillar that looks like this so I have no idea what species it actually is and the name I guessed was just from pictures I found on Google, which were very few by the way, like two to be exact! If anyone is interested or wants to ask me more questions or wanted to see more pictures (I have plenty) I would greatly appreciate any info you have and would just love to talk about it! Please feel free to contact me through here. I've never used this website before so I don't know exactly how it work so I am so sorry if this was not allowed!
Status: Resident
Verified by: rogerdowner
Coordinator notes: None.
Checklist region(s): United States, Ohio, Muskingum County 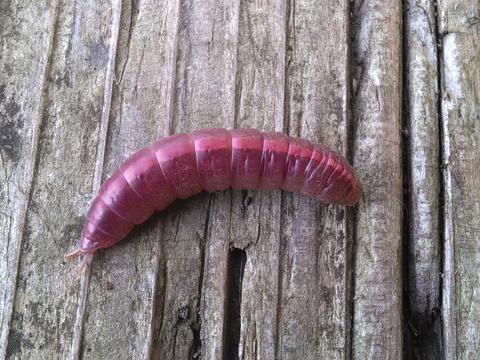