Submitted by: A_baldini
Specimen type: Photograph
Observation notes: These sulphurs were very common around our campsite, nectaring throughout the day in fields of flowers alongside wood-nymphs. This one was seen on a warm, sunny, and breezy afternoon. Also, do you know what kind of flower it's nectaring on? They seemed to attract a lot of butterflies.
Status: Resident
Verified by: mikefisher
Coordinator notes: The individual is worn and it looks a lot like C. alexandra as you suggested but it has enough characteristics of Scudder's Sulphur that I confirm it as that species not alexandra. C. scudderi can be found later in the summer at the altitude where you took this picture, especially to meadows along streams or a river that drop down from higher altitude. It does not seem to have a definite ring around the disc spot in the middle of the hindwing on the underside that scudderi usually have but it does look like there is a small satellite spot scudderi always has and alexandra sometimes has but quite infrequently in the mountains. The black band on the forewings you can see clearly looks like it is wider than typical on alexandra males which is narrower and the edge of the forewings has a more rounded outer margin. This is a straighter line on alexandra. Mike
Checklist region(s): Larimer County, United States, Colorado 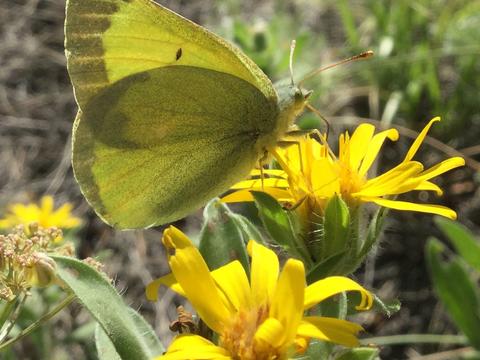