Submitted by: Christian.Nunes
Specimen type: Photograph
Observation notes: Partly cloudy and about 80F. I found this skipper nectaring at a patch of alfalfa flowers on the side of the Foothills Trail on City of Boulder OSMP lands just west of North 36 and north of Broadway. The butterfly was adjacent to the Farmer's Ditch and an associated wet sedge meadow. I searched this meadow for potential wetland species (Long Dash, Two-spotted Skipper, Bronze Copper), but found none. I have never seen a Sachem before and my ID is tentative. It was a large skipper that reminded me of a Polites. The ground color was an interesting yellowish color and there was one bright, square spot on the ventral side of the HW, plus a faint post-median band and one other faint inward spot closer to the body. There were bold white spots near the tip of the FW, visible from underneath. Above, the markings were very bold with extensive pale spots distrupting the black-and-orange pattern. I think the only other possible ID would be a Long Dash, but it doesn't have the creamy bands on the underside of the HW like I'm used to.
Status: Resident
Verified by: mikefisher
Coordinator notes: This is a female Ottoe Skipper Chris. Maybe a new species for your area there or did you submit a photo of a male last season or two ? Mike
Checklist region(s): United States, Colorado, Boulder County 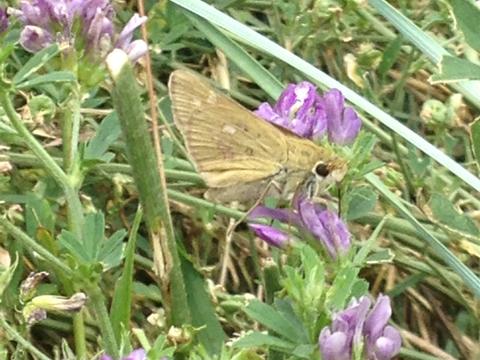 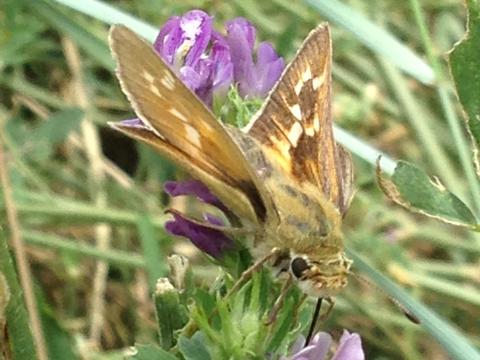