Submitted by: Robert Gorman
Specimen type: Photograph
Observation notes: warm clear sky 77 ground moist very green, best moisture in a while due to some rain in most months except jan. very strange behavior for a butterfly, Diane found this again, i watched it fly it was very elusive acting like other moths that we saw flying into thickets of tight sticks on base of shrubs. or into tall grass. These especially liked to fly up under overhanging rock ledges, or onto rocks that coloring matched so well that they disappeared. we saw a lot of these. but there behavior made it hard to get positive id on most. so many moths also flying around 1430 hrs until 1700 have seen the moths get stirred up before in this area. have gotten photo's of a few the colors are very similar but the behavior was so identical i disregarded these insects until they went for nectar. then we were to get a good positive id. we saw at least 5-6 individuals of this species. also gph, loki, queen, calif patch 100s, painted ladies. sleepy orange, wrights metal mark. checkered skipper (white) , orange skipper ling some large whites that did not stop. dusky probably funeral deer weed on road side for a mile long area in full bloom. majove yucca, agave, sweet bush, brittle bush, cacti, juniper. grasses buckwheat so much blooming. could not figure out why arizona skipper was checking out so many dead looking, maybe there food plant is a late season bloomer and will start growth spurt soon? could not locate its food plant said to be Yellow felt plant and rock hibiscus, as per The Monroes, in Butterflies and their favorite flowering food plants! Borrego springs area has carpets of annual flowers and tons of larva mostly ladies/sphinx moths. they will be heading north soon ken!
Status: Resident
Verified by: Ken Davenport
Coordinator notes: None.
Checklist region(s): United States, California, San Diego County 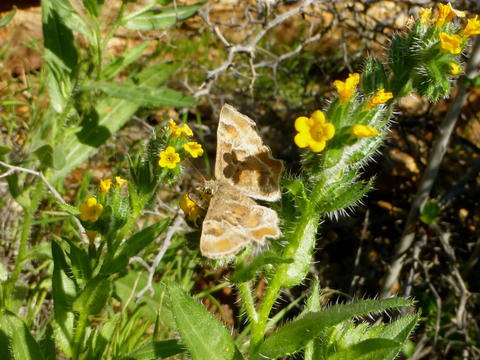