Submitted by: TCollins
Specimen type: Photograph
Observation notes: This was part of the Boerne (Kendal County),Texas NABA count. It was an overcast day with fair lighting and very low wind conditions - temperature was around 80 degrees Earlier I found and photographed a typical Dusky-blue Groundstreak. A few minutes later and about 50-75 feet on down a mowed trail, I found this bug in the brush and grass along the trail. At first I though it was another Dusky-blue, but then noticed the much bolder orange streak in the wing and the tail spots lacking any red caps. I have encountered this dilemma before on my ranch in Kerr County as this would be fairly far out of range and Kaufman speaks of intermediates. I'm not sure what he means by that - are we saying there are hybrids or because they appear to be so far out of range the fall back position is intermediate - meaning we don't know what it is and/or we don't have enough data to support a different range for the two similar species. I will let the pictures speak for themselves and gladly accept any suggestions on how to better id these Calycopis. The times on the submitted pictures are later than when actually taken due to the process of cropping thus modifying the time stamp - note modified. time.
Status: Resident
Verified by: stomlins701
Coordinator notes: I am basing the id as C. isobeon on the narrow red bands and on range. There is almost no orange over the hindwing black spot, which would be a characteristic of C. cecrops. There are supposed hybrids with characteristics of both, and these are typically between the Houston and San Antonio areas. Many of these sightings are contested between reviewers. Possibly the two may really be one species (cecrops) with just a different form in the southern part of TX. SAT
Checklist region(s): Kendall County, United States, Texas 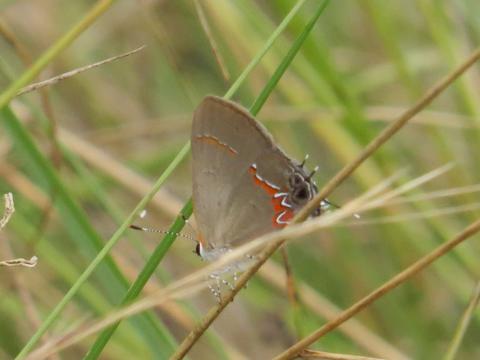 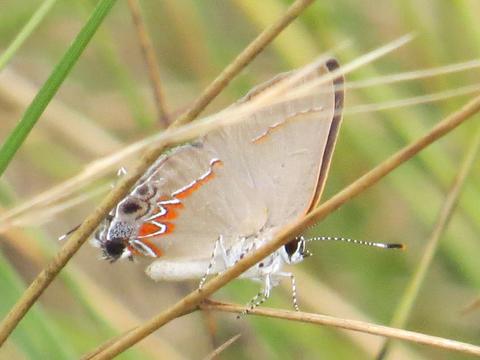